Sail World – Riggtech Build it, Rig it, Sail it 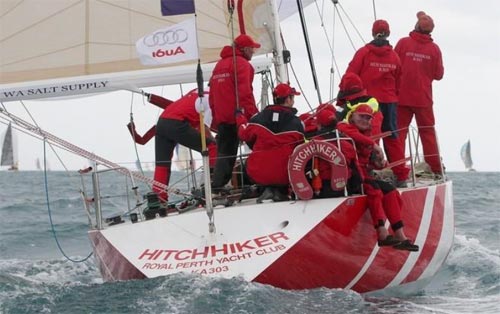 It’s impossible to talk about Riggtech without first looking at its founder, Phill Bate. He’s a natural born rigger.

As Phill, himself explains, ‘I’ve been at it since I was a kid. Dad and I built boats, rigged them and then sailed them. I was always sailing, but it was at this time that I got very interested in the rigging. It was a great grounding for understanding loads, how to bolt fittings down and not taking any risks. It gives you a thorough approach to it, rather than just a guess.’ 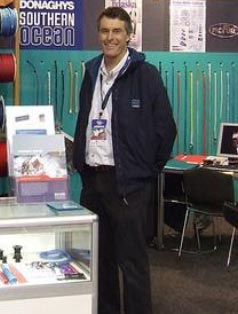 Not surprisingly, Phill did a boat building apprenticeship with Halvorson and Gowland who built Ballyhoo, Patrice, Apollo and a string of other, very successful racing boats. The wide and varied nature of the experience that Riggtech can bring to any marine or architectural project, for that matter, is born out of the various craft he sailed or built and a deep understanding for the loads and structural issues inherent in them.

‘I had started out sailing Manly Juniors, Flying 11s, Cherubs, and Lasers. I did ten years in Lasers and sailed near the very top of that. There were also Etchells, 5.5’s and J24’s. You know, all those kinds of boats. Along the way there was a win in the Etchells State Championships, some podium finishes at the Nationals and then I did the Admiral’s Cup on Hitchhiker’, Phill added.

Interestingly, Phill was the leading shipwright for the building of Hitchhiker in Brookvale, as a contractor for Ken Beashel. He then went on to work for Ken for some four years and then did the Admiral’s Cup, as well as a lot of trips overseas with 5.5s, Etchells and Lasers.

‘I signed up with Alan Bond in ’84, to try to defend the America’s Cup and spent three years with the campaign in Perth. I was doing boat maintenance and rigging. You get a lot of guys who have come from many different areas, so you’re supporting the whole thing in the maintenance department.’

After Perth, the campaign went up to Japan and taught the Japanese how to sail the 12Metres and also got to do the World Championships in Sardinia, as part of it. ‘I did a lot of match racing when I was with Bondy, like Congressional Cup and Liberty Cup, which used to be in New York. I don’t think they run that anymore, but we did the Liberty Cup in ’84. It’s just always been boats, pretty much’, Phill commented.

It all led to the rigging side of it, and the business was started in 1989 as Phill Bate Yacht Works. ‘In 2000, we changed it to Riggtech Pty Ltd, because of the shipwright background and then when the rigging started to go so well, we decided that rigging was the way forward and we should have a name that reflects just that.

The added bonus was that it got my name out of the title, which is perfect, as we are a fair bit larger than just me’, Phill happily pointed out. Originally, they were based at the Royal Prince Alfred Yacht Club on Sydney’s delightful Pittwater and from there we expanded into some factories at Mona Vale.

‘Beyond yacht rigging, we’ve always done architectural rigging too, so this location allows those customers to access us more easily. We’ve now got a full machine shop and fabrication facility here and a 30metre flexible spray booth, which allows us to do the painting and full refurbishing of masts, in a controlled environment. We are opening our specialist retail store in a few month’s time with a much larger rigging facility too’, Phill explained.

At Mona Vale Riggtech specialist shop, wont be a full-blown chandlery, as a specialist rig shop and so it is mostly rigging related items that you’ll find in the shop. What they want to achieve is the fact that their business is built on knowledge and experience and unlike some typical chandlery, you won’t get some 16-year-old telling you what you need on your boat.

We’ve got a lifetime’s knowledge within the company and all of the sailing and background that we all have goes into that. If someone wants a particular fitting or a system, then we can advise them on what’s best and get talked through the scenario rather than merely provide a guess’, Phil was quick to point out.

Befitting a 20+year veteran of the industry, the company’s list of distribution agencies has also grown over time. Phil points out, ‘We are exclusive Australian sales and service agents for Holmatro yacht rigging hydraulics and winches. Holmatro started out with the famous Jaws of Life and a range of mainly hydraulic safety equipment for pulling people out of cars. 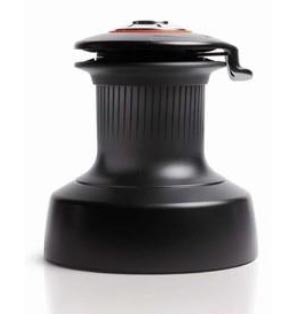 That’s where their main market is and they sell it all around the world to rescue departments. It was natural for Holmatro to expand into yacht rigging. With a background like theirs, you’d expect them to have a comprehensive range of emergency rigging cutters, and they do. There are also boom vangs, mast jacks, hydraulic control systems and integral hydraulic backstay adjusters, which you bolt straight onto your back stay chain plate. These are the typical handle and thumb screw variety for pumping and easing. However, these Holmatro ones have two speeds, so you won’t find yourself nearly halfway up the first beat by the time the back stay is on’, Phill proudly mentioned.

‘Holmatro have also recently introduced the Holmatro aluminium and bronze yacht winches, which are a very high quality product.

‘We’ve also got Reckmann Furlers. You know, we’ve had quite a bit of experience with furlers over the years, because we’re always repairing them and we stock Reckmann, because they are well ahead of the game. Reckmann are a really nice furler and they will last for a long time. Not the cheapest necessarily, but certainly fantastic. The manual ones have a terrific bearing system and we use them a lot on boats we are preparing. We see their hydraulic/electric and under-deck fitting versions on Superyachts that come to Australia, as well.’

Another brand that Riggtech stand by are Echomax radar reflectors, which are regarded as the best performing of their size in the world. ‘They are highly acclaimed by commercial and military authorities and pleasure vessels alike. They are also built to outperform the stringent specifications of SOLAS accreditation and they’ve just introduced this active one, so it can be reflected to the masthead and has a cable that goes down to an alarm. If there’s something within the area of the yacht, it will respond and go off with an alarm to warn people’, Phil explained.

‘I really like Tylaska snap shackles and deck hardware, because they pursue a different product mission to others in this field. Instead of looking for ways to cut costs, its shackles are aimed to be the best possible product made – based on physics and not economics. Using processes normally reserved for spacecraft and critical aerospace parts, Tylaska create ultra strong components for applications where failure is not an option. You see overall we tend to stick with the good stuff because it usually comes back on you so we try not to let our levels of quality go down for the sake of that kind of thing’, Phill highlighted.

‘Ropes and cordage is another exciting area where there lots of things happening right now. We’re working with Future Fibres. The soft attachments, like looping everything on, have changed in rigging recently. It’s like going back to tall ship technology, in a way. Everyone’s using lashings, rather than shackles to attach stuff to the deck. It’s mostly for weight and yes, there is a bit more maintenance that goes along with it. For instance there was a 50 footer here that we were getting ready for the Sydney to Coffs Harbour race.

‘They have got a vang tackle system now and instead of using blocks, they’re using low friction rings. These are just like a machined ring that is anodised and you pass the cascade tackles through the rings. You splice half on one way and half of the other part through the centre, instead of blocks. There’s certainly a weight saving and they’re probably more durable too. All that kind of technology is what’s happening at the moment. The overall aim is to remove the blocks and then running Spectra or Dyneema through. Dyneema is really very good with avoiding the hassles of abrasion. If you get the right size rings, you can just cast the spectra through the ring, instead of a heaf and there are no working parts’, said Phill.

Cordage has certainly come a long way with all the different fibres out there and you can tailor a running rigging package to the requirements of the boat, the sailors and the budget. It is the different covers on the cordage that has allowed such diversity of application to be possible. Phill explains.

‘It’s all becoming simpler. Where you used to have an outhaul on the top of a boom, with a car and track and all that working gear, these days you just have loops of spectra webbing around the boom attaching to the clew of the sail. That attaches the clew to boom and then you just attach your outhaul to the sail, as well and there’s your outhaul, with no moving parts to worry about. It’s all about knowing the fibres and what they can and cannot handle.’

By way of reference, Phill takes us all the way back to 1987 and the America’s Cup. ‘Kevlar was the ant’s pants at that time, however it was very unreliable because it has characteristics of steel, so it fatigues quite easily. When we were sailing against Kookaburra, we used to say in some races that we would have three windward beats in the race, probably 40 tacks per beat and we would use one set of jib sheets per beat. We’d change them on the next downwind leg, because it was unreliable and we couldn’t with any confidence say that we wouldn’t break at least one on the next beat. Given that the races were so close, we’d be bow to bow all the way and we just couldn’t afford to have unreliable jib sheets. 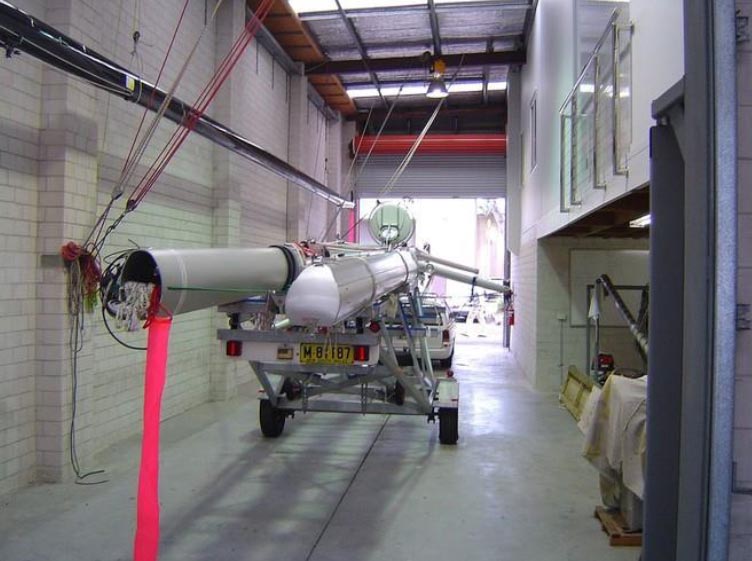 Riggtech always have interesting projects around. Whether it’s a complete mast and furling boom package for a ketch, refurbishment and conversion to furling boom of a large cruising boat or total mast, rigging and running rigging package for new-to-market range of boats, like the latest Buizen yachts. They also did 68 running packages for the popular Sydney 38s and all of the Sydney 32s. There was also all the running rigging for the Transpac winner, Pegasus and involvement with Bumblebee 5 before they went on to win the Sydney-Hobart race.

‘I’ve always maintained that we’ve got to have a high level of quality with this, because it’s a risk aversion business. Anything you do badly will come back to you. We’re about doing it once, and doing it right. I know we’re not the cheapest, but anyone who commits to Riggtech really gets some value out of us and they go away with a finished job
that won’t need anything. We only want to see them back if they’ve got a new project or a new problem’, Phil added as a way of stating company policy. So if you are building it, currently rigging it and no matter where and how you intend to sail it, perhaps a quick chat with the team at Riggtech will make the whole process a more enjoyable experience. In the end it will be experience that makes the difference, so see http://www.riggtech.com.au/ 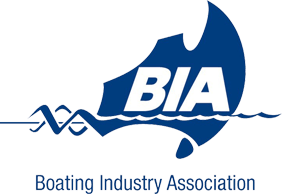